"Fresh-start Reporting" (Fresh Start) is the term applied to the rules that allow companies to present their assets, liabilities and equity as a "new entity" on the day the company emerges from chapter 11 bankruptcy protection. The topic is relevant, as several large companies have recently emerged from bankruptcy and issued financial statements adopting Fresh Start. This article examines the requirements of Fresh Start, including some of the benefits and some of the risks associated with its implementation.

American Institute of Certified Public Accountants (AICPA) Statement of Position 90-7: Financial Reporting by Entities in Reorganization under the Bankruptcy Code (SOP 90-7) is the authoritative literature that defines Fresh Start. The fresh-start provisions of SOP 90-7 may only be applied if the following two conditions are met:

According to the statements, entities that adopt Fresh Start should apply the following principles:

Companies that meet the conditions for Fresh Start generally include information on the effects of the accounting as an exhibit in their disclosure statement. In order to take the reader of the disclosure statement from the historical balances on the company's financial statements to the fresh-start presentation, the exhibit typically includes a "bridge" from the company's financial statements as they exist prior to emergence to the expected financial statement balances of the rehabilitated company. The bridge shows the reader impact of debt discharge, recapitalization and valuation adjustments on the balance sheet. Typically, the balance-sheet bridge is presented in a five-column format. However, the format can vary between companies, as specifics of the method of presentation are not addressed in SOP 90-7.

Like purchase accounting, the application of Fresh Start is relatively easy at the company's top consolidation level. Modifying the company's books and records to institutionalize the accounting is the more difficult task. Issues that require attention include:

Although the requirements and implementation steps discussed above are beneficial to most companies that adopt Fresh Start, there are also inherent risks associated with Fresh Start.

Fresh Start is analogous to "purchase accounting." However, Fresh Start differs in certain important respects. With Fresh Start, there is no one-year adjustment period in which to "true-up" estimates related to the transaction. Uncertainties that were not resolved during the chapter 11 proceedings may continue to exist after the company emerges from bankruptcy. Such uncertainties are referred to as "pre-confirmation contingencies." A pre-confirmation contingency could be a contingent asset, a contingent liability or a contingent impairment of an asset.

According to AICPA Practice Bulletin 11: Accounting for Pre-confirmation Contingencies in Fresh Start Reporting, after the adoption of Fresh Start, adjustments that result from a pre-confirmation contingency are to be included in the determination of net income from continuing operations in the period in which the adjustment is determined and separately disclosed. Such adjustments can result from resolution of a contingency or changes in estimates of amounts initially recorded at emergence from chapter 11.

Resolution of pre-confirmation contingencies could have a direct, and in some cases material, impact on the financial statements of a company after it has emerged from chapter 11. In addition, a company that adopts Fresh Start and emerges from chapter 11 with large amounts of goodwill and other intangible assets is susceptible to impairment charges should the company not meet the underlying financial projections that formed the basis for the enterprise valuation.

Two companies that recently emerged from chapter 11, US Airways Group Inc. and The Warnaco Group Inc., reported detailed Fresh Start disclosures in their annual and quarterly reporting that help to illustrate the risks associated with Fresh Start. 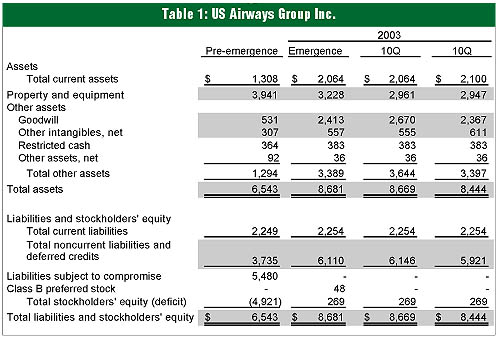 Pre-emergence, US Airways reported approximately $3.9 billion of property and equipment and $500 million of goodwill. As a result of revaluing its assets and liabilities and implementing Fresh Start, upon emergence from chapter 11 US Airways reported approximately $3.2 billion of property and equipment and $2.4 billion of goodwill, as disclosed in the Fresh Start footnote to the financial statements. In the two quarters that followed, US Airways reported additional changes to its balance sheet at emergence. Based on the information contained in the public filings, US Airways re-allocated amounts assigned to goodwill and intangible assets to property and equipment and noncurrent liabilities and deferred credits at emergence. These amounts changed as a result of changes in estimates subsequent to emergence. Although US Airways did not report an income statement charge related to the change in estimates, had there been underestimates that related to other areas such as pension liabilities, post-retirement benefits and settlement of litigation (amounts that are significant), an income statement charge would have been taken subsequent to emergence.

US Airways has recently renegotiated its financing agreements due to non-compliance with debt covenants resulting from weaker-than-expected financial performance. Should US Airways fail to meet the financial projections that it submitted as part of its emergence from chapter 11, there is a risk that goodwill and other identifiable intangible assets could be impaired (meaning that the carrying value of the assets is greater than the fair value of the assets, as calculated using an appropriate methodology). Due to the state of the airline industry and US Airways's recent financial performance, the risk of an impairment charge related to the carrying value of its goodwill and intangible assets is one that US Airways continues to face. 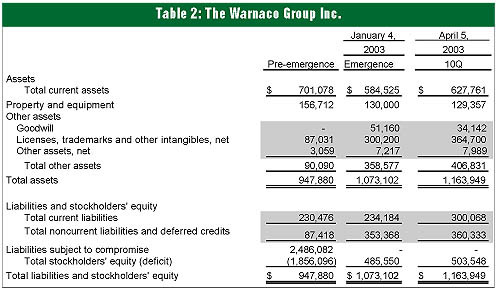 Both Warnaco and US Airways confirmed reorganization plans that distributed a "pot" of value to the creditors. Under such pot plans, since the total value to be distributed to creditors is fixed regardless of how big or small the pool of pre-petition claims, there is less risk that pre-confirmation contingencies related to the estimated value of pre-petition claims will result in a charge to the emerged entity's income statement. In plans where creditors are satisfied by a fixed return per claim dollar, the chances of post-emergence financial statement impact from claims estimation become increasingly greater in reverse proportion to the status of the company's claims-resolution process at the date of emergence.

Although there are significant benefits associated with adopting Fresh Start, there are also clear risks that can affect the emerged company. Understanding Fresh Start will be especially relevant to the financial community in the coming fiscal quarters as large companies such as Exide Technologies, Global Crossing, Peregrine Systems and MCI adopt Fresh Start and report their financial statements subsequent to emerging from bankruptcy.

1 Anthony F. Caporrino is a manager in Huron Consulting Group's Corporate Advisory Services practice. He has a wide variety of experience in the reorganization of companies and in performing accounting due diligence for financial buyers. Return to article

2 Views expressed in this article are those of the author and not necessarily those of Huron Consulting Group LLC. Return to article

3 All information was obtained from the available public SEC filings. All amounts are presented in millions of dollars. Return to article

4 All information was obtained from the available public SEC filings. All amounts are presented in thousands of dollars. Return to article